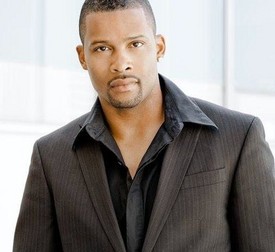 Actor, Trae Ireland is not only showing his talent on big screens, he’s leading the pack on theatrical stage. Ireland recently landed a part as the lead male ‘David Davis’, in the stage play, ‘Sunday Mourning” written and produced by Kinnik Sky (Dream Girls, For Colored Girls) and directed by Keena Ferguson (Homeless Destiny). ‘Sunday Mourning’ has already received 7 NAACP nominations and 3 Awards for this outstanding theatrical drama.

Trae Ireland takes on the lead male role as ‘David Davis’. David is a struggling law student, living with his best friend, ‘Sunday’ (Kinnick Sky). ‘Sunday’, deeply in love has been there for David the whole way. She is always by his side, always helping him whenever he needs it and even when he doesn’t. Sunday is loyal to the core and decides she wants more from David than just living together; she wants marriage. Thinking she is living the ‘American Dream’, Sunday is surprised when a turn of events turns her ‘dream’ into a nightmare. David Davis (Trae Ireland) is on a whole different track of deceit, lies and unthinkable betrayal forcing Sunday to ask, “What happens when loving you, means losing me?”

Trae Ireland is sure to light up the stage, as he takes on this dramatic role in “Sunday Mourning”. Ireland is known from his stage performances, “A Fool and His Money” (David E. Talbert) to films such as,”Cleaver Family Reunion” and “Holla II”(H.M. Coakley). Look for much more of Trae Ireland in the near future. He has several projects on the rise. Trae and the rest of the ‘Sunday Mourning’ cast will be touring the east coast October, 2013. For more information on the award winning “Sunday Mourning”,go to www.kinniksky.com.

GCM Grosvenor to Present at Morgan Stanley US Financials, Payments &...