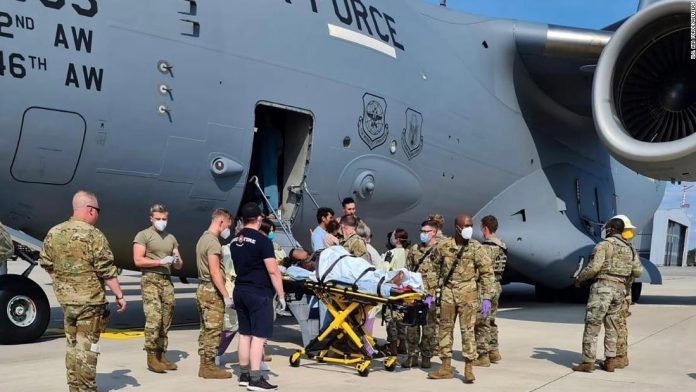 In a Twitter thread Sunday, the US Air Mobility Command said the woman went into labor aboard a C-17 transport aircraft during the second leg of her journey fleeing the Taliban takeover of Afghanistan. The flight was from a staging base in the Middle East to the large US air base in Germany.

The US Air Force said the mother began to have complications while the aircraft was at its flight altitude, typically above 28,000 feet (8,534 meters), due to the lower air pressure in the plane.

“The aircraft commander decided to descend in altitude to increase air pressure in the aircraft, which helped stabilize and save the mother’s life,” said the tweet, which was sent from the US Air Mobility Command’s official account.

Once the plane was on the ground at the Ramstein base, personnel from the Air Force’s 86th Medical Group assisted in the delivery of the baby in the C-17’s cargo bay, the tweet said. Mother and baby were then transported to a nearby medical facility where they are in good…

‘That is Not America’s Flag:’ Artworks problem what it means to be from the USA

New Zealand declares a nationwide lockdown … over one Covid case

India’s acquired SaaS, the following huge factor in tech, and it...