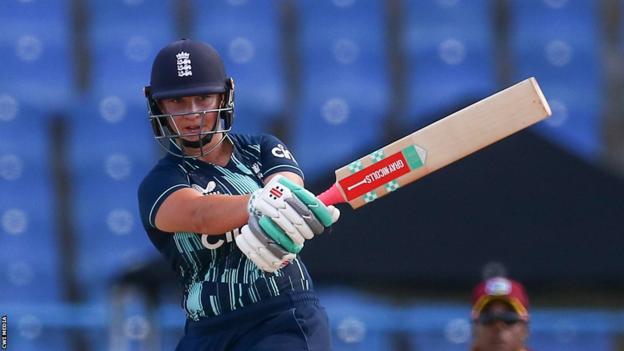 England all-rounder Alice Capsey has been ruled out of the rest of the West Indies tour with a broken collarbone.

Capsey, 18, sustained the injury after landing awkwardly on her left shoulder attempting to save a boundary during the first one-day international in Antigua on Sunday.

She will now return home to the UK.

England, who won the first match comfortably by 142 runs, will face West Indies in two more ODIs before a five-match Twenty20 series.

Capsey had to be helped from the field after receiving several minutes of treatment and was taken to hospital for assessment.

The Oval Invincibles player opened the batting for England in an ODI for the first time after being picked ahead of Emma Lamb and scored 17 off 13 balls.

Capsey, who was awarded her first central contract last month, is a key part of England’s plans for the T20 World Cup in South Africa, which starts in February.