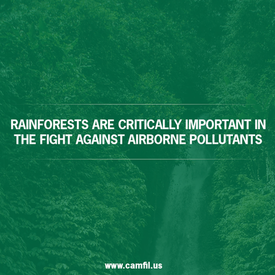 The world’s rainforests are an ecosystem that supports thousands of animal species, but they also have a lesser-known function that is equally important: acting as natural air filters. What does that mean?

Rainforests create 20 percent of the world’s supply of oxygen, which means that the more trees we lose due to deforestation, the less supply of clean air in the world. (1)

The plight of the rainforests around the world may seem as if it doesn’t affect you, but you would be wrong. Not only do rainforests play a critical role in the formation of clean air, they are also important in the fight against air pollution. Let’s take a look at the characteristics that make rainforests so important, the efforts to preserve these areas, and how you can naturally purify the air at your home and workplace.

Why Rainforests Are Important in the Fight Against Pollution

There are many reasons why rainforests are important in the fight against pollution, and we’ve touched briefly on several of them, but it’s worth taking a deeper look.

Rainforests have a dense collection of trees, and studies have found that trees have a unique and powerful ability to interact and dilute some of the worst airborne pollutants through the world.

But according to the U.S. Department of Agriculture (USDA), forests can help lower air pollution by absorbing these contaminants without suffering any harm.

Trees may absorb some pollutants in the natural life processes common to all plants. In an exchange of gases, plants take in carbon dioxide, convert it to food, and release oxygen. During normal opening of these pores, other elements may also enter. These include pollutants such as chlorine, sulfur dioxide, and fluorides.” (2)

Plants use some of these pollutants as nutrients, helping to purify the air.

Another reason trees act as natural air filters are that their leaves have spines and hair that can trap pollutants. Even more fascinating, the number of pores on a leaf generates an electrical charge, which can attract airborne particulates.

Furthermore, studies have found that the rough fissures in the bark of a tree can trap and absorb pollutants.

“Rainforests are critically important in the fight against airborne pollutants,” stated Armando Brunetti, Camfil Americas Executive Vice President. “The ability of this ecosystem to absorb carbon dioxide and form a shelter against harmful contaminants is invaluable. That’s why we have partnered with World Wide Fund for Nature to preserve a part of the Borneo rainforest. We are committed to doing our part to support nature’s own air filters.”

Unfortunately, deforestation is proceeding at such a rapid rate that rainforest conservation efforts have become a race against time.

According to Conserve Energy Future, at the current rate of deforestation, there will be no rainforests in 100 years. That’s because 1.5 acres of forest are destroyed every second, which is equivalent to 20 football fields being destroyed every minute. (3)

Not only will deforestation affect the world’s clean air supply, it will also cause nearly 30,000 animal species to become extinct in the next 25 years.

The World Wide Fund for Nature (WWF) reported that with the forests gone, [carbon dioxide] is no longer converted through photosynthesis, and the crops that replace forests only absorb a fraction of [carbon dioxide] compared to rainforests. Along with industrial pollution, rampant deforestation in South America and elsewhere has significantly increased the amount of [carbon dioxide] in the atmosphere. (4)

Given this grim reality, conservation is critical to saving these forests, and some common rainforest conservation methods include:

But saving rainforests is difficult to achieve without a political solution that convinces government officials to change their mindset about the importance of preserving these special areas in the world.

Rainforests are natural air filters, but purifying your air naturally, does not require you to live in that environment. Some natural ways to improve indoor air quality is to buy more plants, which can create more oxygen and absorb more carbon dioxide, and increase the flow of outdoor air by opening more windows.

Camfil air products can be used to filter and clean the air in any indoor environment. Our products represent the very best in air filtration technology and innovation. From replacement filters, capable of removing sub-micron sized particles and gases, to complete air circulation and filtration systems, every product is backed with more than 50 years of experience.

By Camfil a Leader in Air Filters

Other Resources for you