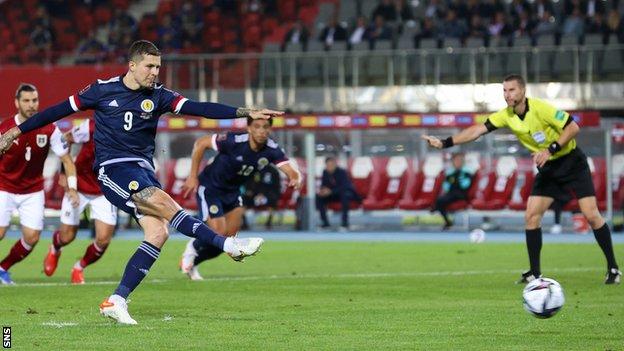 Scotland impressively revived their World Cup 2022 qualification hopes by climbing into a play-off place after a momentous victory in Austria.

Lyndon Dykes’ penalty, awarded after a VAR check, gave Steve Clarke’s men a lead they clung on to in Vienna.

Stephen O’Donnell – having survived an Austria penalty appeal – and Che Adams had chances to ease the Scots’ nerves.

But the visitors stood firm amid intense second-half pressure to collect a priceless and deserved away win.

Coupled with runaway leaders Denmark’s 5-0 defeat of Israel, it moves Scotland up two places to second. Clarke’s side are a point clear of the Israelis, who visit Hampden next, and four above Austria with four games remaining.

With the three-way fight for the runners-up berth gathering pace, Scotland needed a big performance and to a man they delivered.

Emma Raducanu: The making of Nice Britain’s US Open finalist