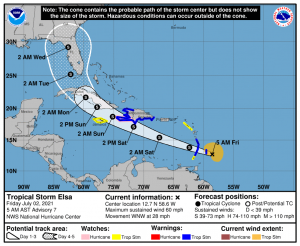 Tropical storm Elsa intensified to a category one hurricane Friday morning, according to the National Hurricane Center.

The NHC said surface observations from Barbados indicate that Elsa’s maximum sustained winds have increased to nearly 75 miles per hour.

Elsa is the first hurricane of the 2021 Atlantic Hurricane season.

The Sister Islands, as of 6pm 1 July, were placed under a tropical storm alert.

Current forecast models, however, have the storm path just north of the Sister Islands.

The Cayman Islands National Weather Service at 8am Friday, 2 July said the current projected path would not result in tropical storm-force winds for the Sister Islands, but rather fresh to strong winds are likely there with slightly slower winds in Grand Cayman.

The Cayman Islands can expect…