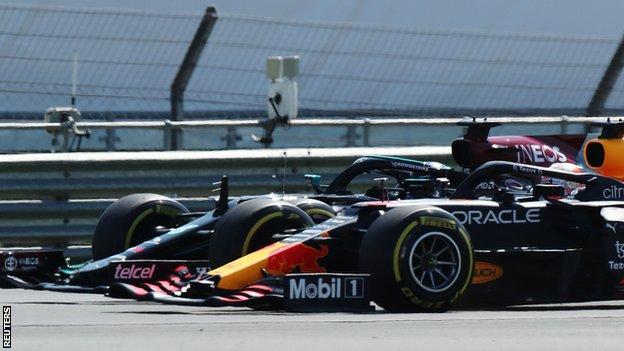 Max Verstappen has accused Lewis Hamilton of being “disrespectful” and “unsportsmanlike” following their collision in the British Grand Prix.

The Red Bull driver was taken to hospital for precautionary checks after suffering an impact of 51G in the first-lap crash.

“Very disappointed to be taken out like this,” Verstappen said.

“Watching the celebrations while still in hospital is disrespectful and unsportsmanlike… but we move on.”

Verstappen said on his Twitter account that he was “OK” following the incident but he has not yet been released from hospital.

Hamilton was given a 10-second penalty for the incident, which dropped him to fourth place after his pit stop, but he fought back to overtake Ferrari’s Charles Leclerc to win the race.

Verstappen said: “The penalty given does not help us and doesn’t do justice to the dangerous move Lewis made on track.”

Hamilton said: “I was pretty far alongside him but I could…