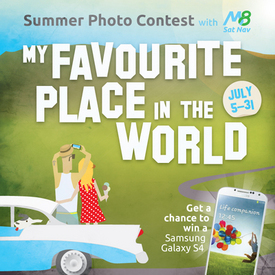 Marking the beginning of the summer holidays – and celebrating the UK’s travel hotspots – mobile app M8 UK has launched a creative photo contest inviting entrants to submit photos of their favourite places to be in with a chance of winning some of the latest gadgets available on the market.

Hosted on M8 UK’s Facebook page, all photos entered into the contest will be opened up for voting by fellow Facebook fans. The twenty most popular photos – those with the most votes – will then be sent through to the next round during which a panel of judges will select the winners of the impressive prize packages that include a Samsung Galaxy S4, tablet device, and digital cameras.

Whether capturing a specific place, or celebrating the culture of a particular area, judges are looking for creative images that engage the M8 community and showcase the most cherished locations in the UK.

“Everyone has that special somewhere – a beach they used to go to as a child, a favourite picnic spot, or even a service station that reminds them of taking happy holidays. We want people to get involved, to tell us about their favourite places, and to celebrate the beauty and culture of the UK,” explained Leslie Hassoun, Marketing Manager at Telmap, developers of M8 UK.

Running at the same time as the mobile app’s European counterparts, the competition is set to showcase some of the most popular places across Europe and South Africa and aims to uncover new creative talent.

Shared among the growing international M8 community, photos will include M8 Facebook fans’ most treasured locations in Spain, France, Germany, South Africa in addition to those in the UK. Calling on all those with a great photo of their favourite place, M8 asks that individuals enter the competition – running until July 31 2013 – by ‘liking’ the M8 UK Facebook page, and posting their photos to the dedicated tab.

“A bit of fun over the summer holidays, our Facebook photo contest will hopefully uncover some local hidden gems, and get people chatting about their favourite places at home and abroad. With the winners being selected from the most popular photos, we’d encourage people submitting an entry to make sure that their friends and family pop over to Facebook to place a vote and show their support!” added Hassoun.

In addition to a competition launched by the Aardman studios and M8 UK via the Wallace and Gromit website offering people the chance to win an in-app prize package featuring iconic Anti Pesto van navigation icon and Wallace & Gromit sat nav voice, mobile app M8 UK has made available a Wallace & Gromit sat nav voice as an in-app purchase alongside its range of celebrity and novelty voices. As a treat for fans, M8 UK is offering Wallace & Gromit’s iconic Anti Pesto van navigation icon to iPhone and Android users for free for a limited period of time to complete the much loved character-themed experience.

With navigation features including turn by turn directions, real time traffic news and speed camera notifications, together with deals from MyVoucherCodes and local information from Trip Advisor, Lonely Planet, the Good Pub Guide, Michelin and Yelp, mobile app M8 has been designed to enhance travel and community living in the UK.

To download the latest version of the app, please visit iTunes and Google Play.