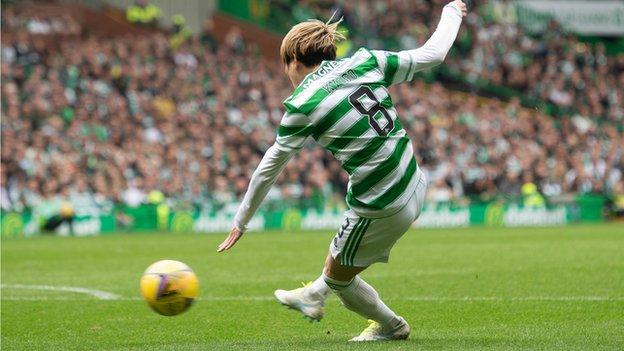 Celtic celebrated receiving the Scottish Premiership trophy by ending their season with a scintillating six-goal victory against Motherwell.

After 20 minutes of probing the away defence, Kyogo Furuhashi fired in the opener before guiding in a fine finish on the volley either side of David Turnbull’s drilled effort.

Jota slotted in a fourth, with Giorgos Giakoumakis’ brace from the bench sealing an emphatic final-day win, ensuring Celtic end the league campaign with a 32-game unbeaten streak.

The loss drops Motherwell, who secured European football with victory over Hearts on Wednesday, to fifth after Dundee United came from behind to win at Ross County.

That means Graham Alexander’s side will enter the Europa Conference League at the second round of qualifying, while Celtic will start their European campaign…

Scotland’s papers: Russia accused of crime of the centuries and council...