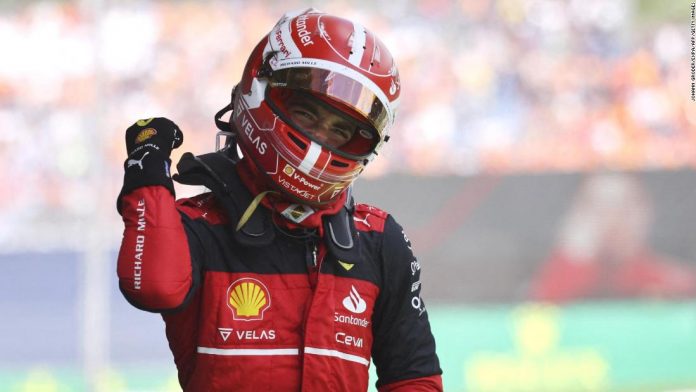 It wasn’t easy for the Ferrari driver as he had to overtake Red Bull’s Verstappen three times to claim his first spot atop the podium since the Australian GP in April.

Despite issues with his throttle near the end of the race, Leclerc was able to hold on, finishing 1.532 seconds ahead of second place.

The victory ends a rotten run of form for the 24-year-old — having missed out on the podium in the previous five races.

It also cuts Verstappen’s lead at the top of the driver’s championship standings to 38 points as the Ferrari driver moves into second place ahead of Red Bull’s Sergio Perez.

After the race, Leclerc stressed how important the victory was for him.

“It was a really good race,” a relieved Leclerc said. “The pace was there, at the beginning, we had some good fights with Max and the end was incredibly difficult. I had this problem with the throttle and it would get stuck at 20 or 30% throttle in the low speed, so it was very tricky but we managed to make it stick until…

How the Czech Republic slipped right into a Covid catastrophe, one...

Norway to proceed with sound experiment on whales, regardless of protests