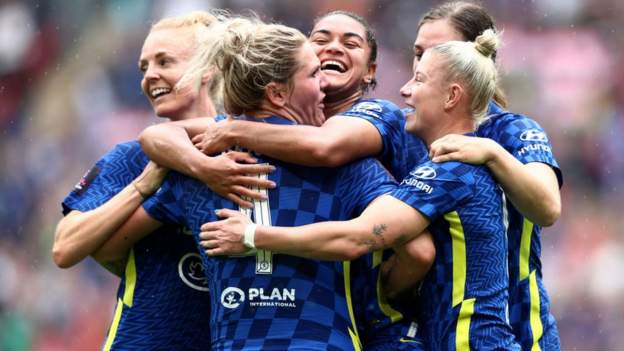 Chelsea defended their Women’s FA Cup crown and completed the Double in dramatic fashion as Sam Kerr scored the winner against Manchester City in extra time in front of a record crowd at Wembley Stadium.

Kerr, who put Chelsea 1-0 up in the first half, kept her cool to slide in a deflected winner after City had twice come from behind.

That came after Erin Cuthbert’s stunning strike had put Chelsea in front, following Lauren Hemp’s curler for City on the stroke of half-time.

City had several chances throughout the match – Hemp was denied by goalkeeper Ann-Katrin Berger, Laura Coombs fired inches over the bar, while Caroline Weir and Georgia Stanway had efforts deflected wide.