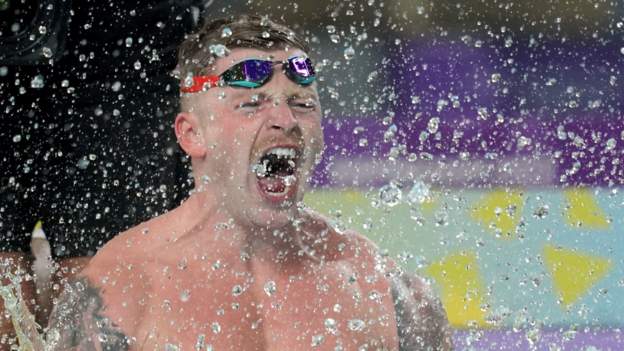 Adam Peaty says he has his “spark” back after powering to a first Commonwealth 50m breaststroke title in what he says is his final race at the Games.

Having missed out on a 100m medal on Sunday as he recovers from a broken foot, the English swimmer had said he was “not bothered” about adding the shorter title to his collection.

That did not appear to be the case as he thrashed the water in celebration.

“I had two options this morning – I either fight or don’t fight,” he said.

“Everyone who knows me, knows I fight.”

Peaty certainly looked ready to fight as he entered the Sandwell Aquatics Centre, beating his chest twice before raising his hand to acknowledge the goosebump-inducing noise from the crowd.

The 27-year-old jumped up and down behind his block,…

Euro 2020: Boos drowned out by applause as England take the...

US Open 2021: Emma Raducanu into quarter-finals after beating Shelby Rogers