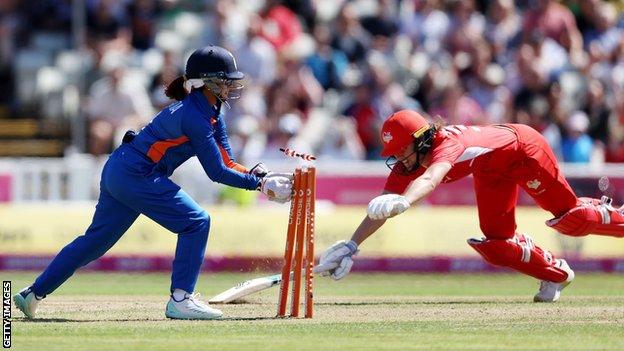 England’s hopes of winning Twenty20 gold are over after the home side fell to a four-run defeat by India in the semi-finals of the Commonwealth Games.

Opener Smriti Mandhana hit 61 off 32 balls, including three sixes, and Jemimah Rodrigues made an unbeaten 44 as India posted a challenging 164-5.

Captain Nat Sciver and Amy Jones looked like they might steer England home but Jones was run out for 31.

Desperate for runs, Sciver was also run out for 41 as England fell short.

India will face either Australia or New Zealand in Sunday’s final while England will face the loser for bronze.

England opener Danni Wyatt told BBC Sport: “Obviously we’re really disappointed not to be in the final but to get a bronze medal would be great. It’s been absolutely amazing to be a part of these Games.”

The Hundred: Southern Courageous’s brutal batting secures them a spot within...