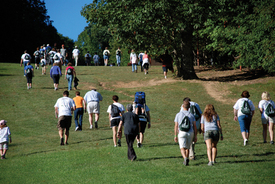 “By bringing together people of all ages and lifestyles, we can create awareness for this debilitating disease”, says Mrs. Mann. Parkinson’s disease (PD) affects over one million Americans and has no known cause or cure. PD is a progressive neurological disorder that affects movement and may cause shaking (tremors), muscle stiffness (rigidity), slowing of movement, impaired balance or other symptoms. Parkinson’s effects daily life, making tasks such as brushing teeth, buttoning a shirt and even smiling difficult.

“The hike begins on the Oregon Ridge Ski Slope, simulating the challenges faced every day by those with Parkinson’s”, expressed Mrs. Mann. Interested hikers and volunteers should register at www.promisesforparkinsons.org.

(Stacey Mann and her father, John Evans, are available for interviews. Pictures are available upon request. Dr. Peter Beilenson, Chief Health Officer of Howard County Maryland, supports the Hike and the efforts of Promises for Parkinson’s. )

Emirates flights to Pakistan will remain suspended till July 15 –...