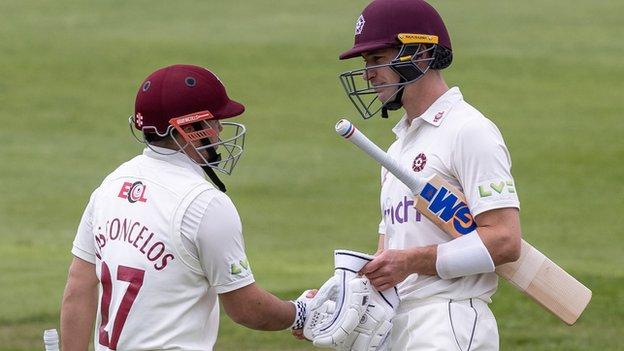 Ricardo Vasconcelos and Will Young racked up a record opening stand after Northamptonshire were put in by Warwickshire in their County Championship match at Edgbaston.

The openers stayed together until after tea to add 287 in 64.2 overs and lift their side towards a commanding 372-2 at the close of the first day.

Vasconcelos, whose previous seven innings this season had yielded a combined 90 runs, stroked 156 before falling to the second ball after tea. New Zealand batter Young scored a polished 134, his 13th first-class century and first for Northamptonshire.

All that Warwickshire captain Will Rhodes could do was rotate his depleted bowling attack and rue his decision to insert. That was a surprising move, especially given that pace spearhead Liam Norwell was again ruled out by injury, so…

County Championship: Middlesex bowl out Somerset for 172 in first innings

England cricket Take a look at match and Royal Ascot to...