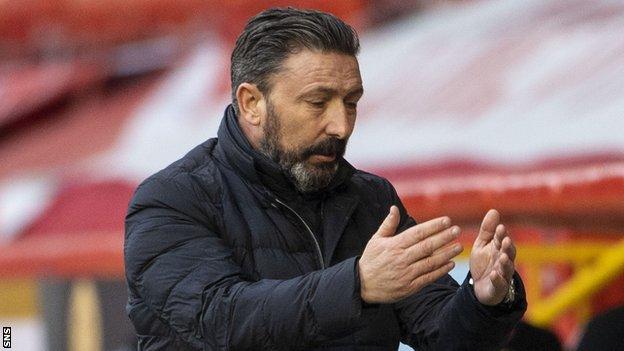 Derek McInnes has left Aberdeen after eight years in charge and the side fourth in the Scottish Premiership.

The 49-year-old, who was contracted until 2022, was the Scottish Premiership’s longest-serving manager and won the League Cup in 2014.

But Saturday’s draw with Hamilton made it one win in nine matches and Aberdeen have scored just five times in 2021.

McInnes thanked the club and fans and said his “motivation to deliver success has never wavered”.

The former St Johnstone and Bristol City boss exits along with assistant Tony Docherty, with whom he reached four cup finals and qualified for European football seven years in a row.

Chairman Dave Cormack says the recruitment of a new manager will start “immediately”. Paul Sheerin, supported by Barry Robson and Neil Simpson, will lead the first team on an interim basis. Aberdeen’s next match is against league opponents Dundee…