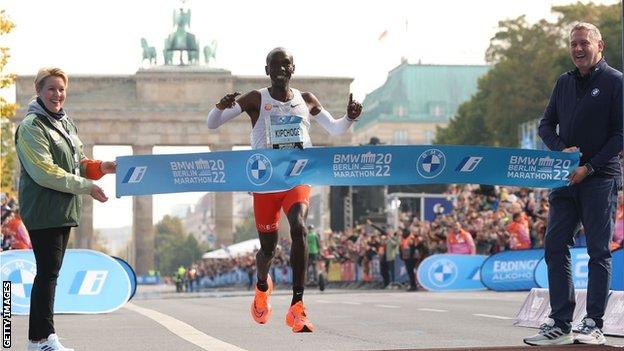 He had previously taken one minute 20 seconds off compatriot Dennis Kimetto’s 2014 record of 2:02.57 in Berlin.

Kipchoge had played down his chances of a world record in the build up.

“I am happy with my preparation and I think I was so fast because of the teamwork. Everything is down to teamwork,” he said.

“What motivates is my family I and I want to inspire young people. Sport unites people and that is what motivates me.”

On an overcast day in Berlin, Kipchoge, who has now won 15 of his 17 career marathons, ran the first half of the 26.2-mile race in 59 minutes, 51 seconds, prompting thoughts that he may become the first runner to break the two-hour mark in an official race

He has run a marathon in under two hours, in Vienna in 2019. However, that was not recognised as the official world record because it was not in open…

Shang-Chi’s Simu Liu: Starring in a Marvel blockbuster does not exempt...