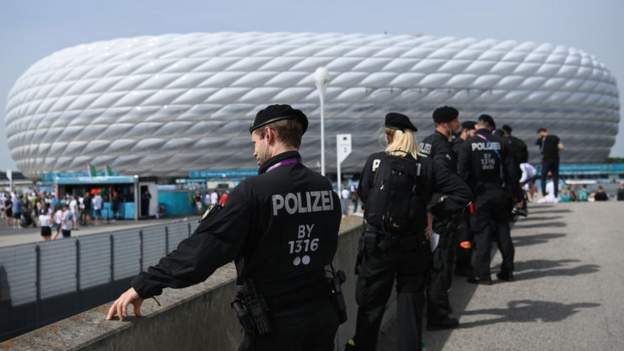 Seven England fans were arrested in Munich on Monday, including three for making a Nazi salute.

The other arrests included two for inciting police, one for using a flare indoors and another for urinating in public.

The Football Association has been working with local police and security services to limit disorder in Germany.

England supporters have been allocated about 3,500 tickets for the away end at Bayern Munich’s Allianz Arena.

Some travelling fans have bought seats in the home section, but the UK’s head of football policing confirmed that the German FA have cancelled a number of those tickets.

“We would always urge people to get their tickets from approved outlets,” chief constable Mark Roberts told BBC Sport.

“We’re aware of it, but not too concerned. It’ll be monitored and hopefully it doesn’t cause any problems in the stadium.”