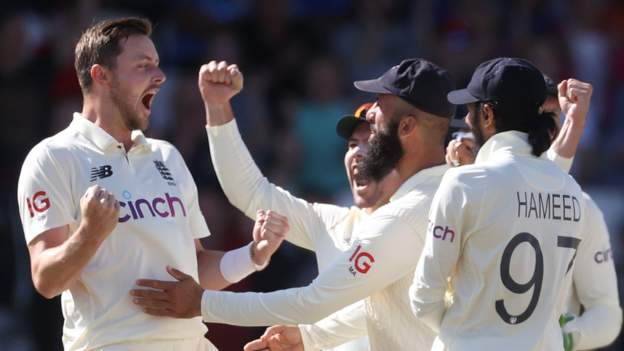 England broke India’s resistance to surge to victory by an innings and 76 runs in the third Test at Headingley and level the series at 1-1.

Ollie Robinson expertly utilised the second new ball on the fourth morning to claim 5-65 and hasten India to 278 all out.

After India had threatened to make things difficult for England by moving to 215-2 on day three, Robinson removed both overnight batsmen.

Cheteshwar Pujara was lbw not playing a stroke for 91 before Virat Kohli, who had already overturned being given out caught behind, edged to first slip for 55.

It was the beginning of India losing their last eight wickets for 63 runs – at one stage they lost three for two – as the game was over 15 minutes before lunch.

It gave Joe Root an England record 27th Test win as captain, in front of his home crowd.

The fourth Test at The Oval begins on Thursday, with the…

County Championship: Hashim Amla scores 215 not out as Surrey proceed...

County Championship: Yorkshire beat Somerset by an innings and 33 runs