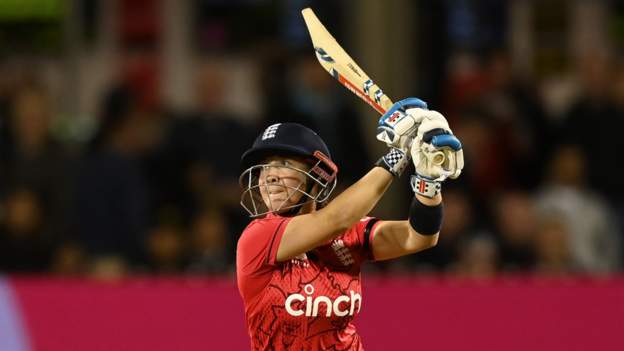 Sophia Dunkley and Alice Capsey led England to a comfortable seven-wicket win over India in the third and final Twenty20 at Bristol.

The victory secured a 2-1 series win for England.

Chasing 123 to win, Dunkley and Danni Wyatt added 70 for the first wicket.

But after losing three quick wickets, including Dunkley for 49, Capsey struck an unbeaten 38 from 24 balls as England reached their target with 10 balls to spare.

Earlier, India were put into bat first and slipped to 75-7, eventually reaching 122-8 after Richa Ghosh’s entertaining 33 from 21 balls.

But England’s performance in the field was vastly improved from the previous game at Derby, where they suffered an eight-wicket defeat.

Sophie Ecclestone, the world’s number one T20 bowler, led England’s bowling attack with 3-25 and was supported by fellow…