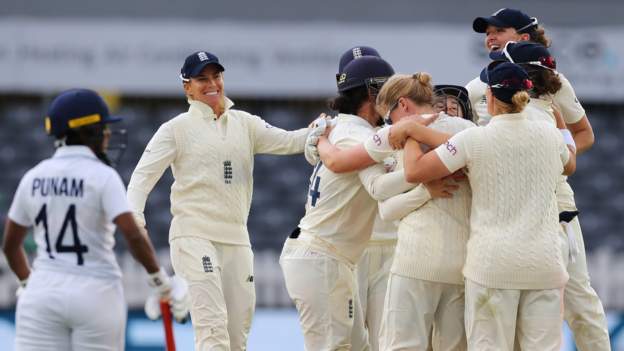 India suffered a dramatic late collapse as England fought back after an audacious 96 from teenage debutant Shafali Verma lit up the second day of the one-off Test in Bristol.

The tourists had been cruising at 167-0 before Verma was caught chasing the boundary that would have brought her a century.

England had earlier declared on 396-9, led by an unbeaten 74 from Sophia Dunkley.

Verma, 17, hit 13 fours and two sixes as she produced the highest score by an Indian woman on Test debut to frustrate England’s bowlers.

She and fellow opener Smriti Mandhana, who made a classy 76, looked to have batted England out of contention but after Verma had hoisted Kate Cross to mid-on, the match swung in the hosts’ favour.