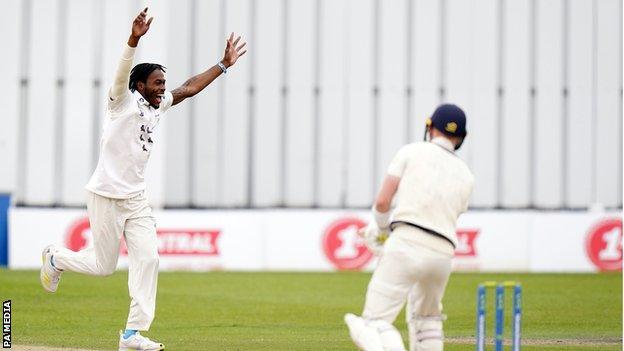 England fast bowler Jofra Archer is an injury concern for the two Tests against New Zealand next month after a recurrence of his elbow problem.

Archer was unable to bowl on Saturday during Sussex’s County Championship match with Kent and will not bowl on the final day on Sunday.

The 26-year-old pulled out of the now postponed Indian Premier League to focus on his recovery.

He also had surgery on a hand injury sustained while cleaning a fish tank.

The first Test against New Zealand at Lord’s starts on 2 June.

Having taken two wickets in the first innings, Archer had bowled only five overs in Kent’s second innings. But after rain delayed play until 17:00 BST in Hove, it appeared as though he was being gestured to return to the attack by Sussex captain Ben Brown.

Instead, George Garton ended up bowling the second over after the restart from the Sea End.

“There was some confusion over the state of Jofra’s elbow,” Sussex…