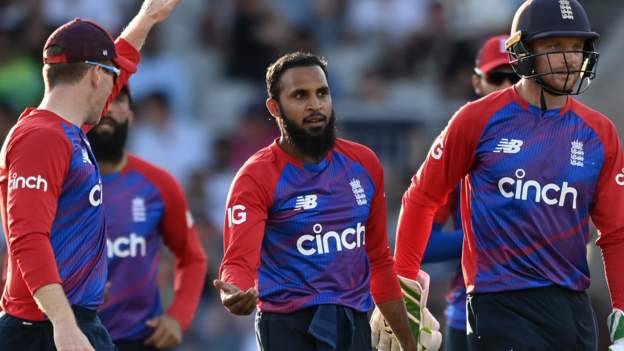 England overcame an almighty wobble to defeat Pakistan in a pulsating final Twenty20 at Old Trafford and win the series 2-1.

Chasing 155 on a dry, turning pitch, England needed 61 from nine overs with eight wickets in hand after Jason Roy’s 64.

However, with Pakistan’s spinners applying a vice-like grip and Dawid Malan struggling, the equation went out to 39 from four, only for captain Eoin Morgan to regain control.

In a dramatic penultimate over, Malan was bowled by Mohammad Hafeez, only for Liam Livingstone to hit his first ball for six then be caught off his next, leaving six required in the final over.

And although Morgan holed out with four still needed, Chris Jordan got the home side over the line with two balls to spare.

England’s own spinners were earlier at the fore, restricting Pakistan to 154-6. Mohammad Rizwan batted through the…