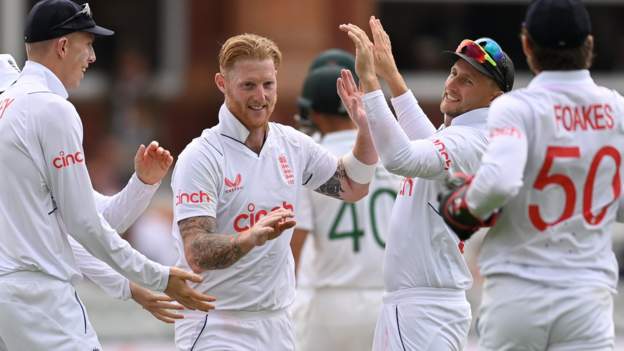 England are clinging on in the first Test against South Africa after a Ben Stokes-inspired fightback on day two at Lord’s.

South Africa opener Sarel Erwee, with 73, was the first to put the Proteas in a commanding position, a lead of 27 with seven first-innings wickets in hand.

But Stokes bounced out Erwee, then had Rassie van der Dussen lbw as part of a South Africa slide from 160-2 to 210-6.

The rot was stopped by Marco Jansen and Keshav Maharaj, who shared a vital partnership of 72 from only 75 balls.

With England looking tired and the game slipping away, Stokes had Maharaj hook to Matthew Potts for 41, leaving Jansen unbeaten on 41 and South Africa 289-7, an advantage of 124.

England had earlier been bowled out for 165, with Ollie Pope out for 73.

Pope was the first of three wickets to fall to Kagiso Rabada, the pace…