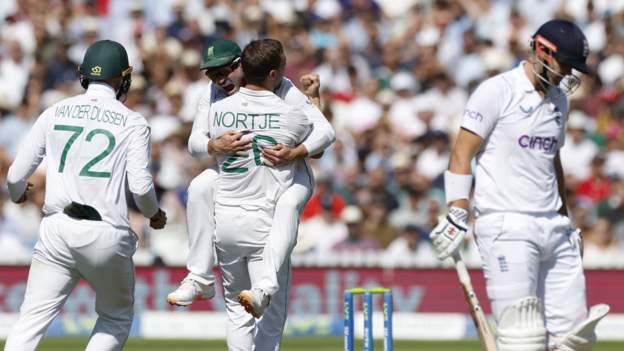 England were blown away to lose the first Test against South Africa by an innings and 12 runs inside three days at Lord’s.

Needing 161 to make the Proteas bat again, the home side crumbled to 149 to suffer the first defeat of the Ben Stokes-Brendon McCullum era.

It was not a loss caused by the swashbuckling approach that brought four wins at the beginning of the summer, but a timid surrender to some magnificent Proteas bowling.

Anrich Nortje was sensational, bowling at rapid pace to take three wickets for no runs in 10 balls.

England earlier took the last three South African wickets for 39 to bowl the Proteas out for 326, despite bizarrely persisting with short-ball tactics.