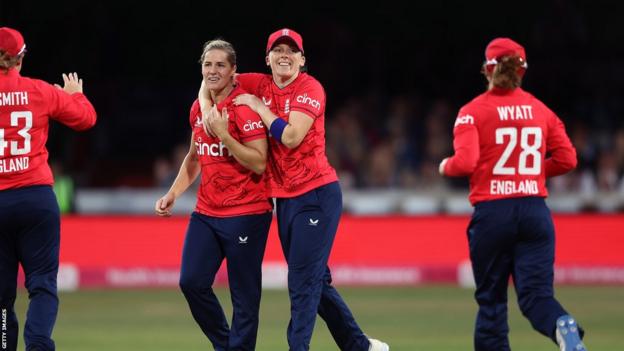 England captain Heather Knight will return for December’s white-ball tour of the West Indies, while opener Lauren Winfield-Hill is also back in the Twenty20 squad.

Winfield-Hill has not played for England since March, but is recalled after strong domestic performances.

Knight returns to lead the side after having hip surgery.

All-rounder Nat Sciver also comes back after taking a break from cricket during the summer.

Fast bowler Katherine Brunt, 37, is included in the T20 squad but will miss the ODIs as England continue to manage her workload.

Opener Tammy Beaumont, who was dropped from England’s T20 side for the Commonwealth Games, has only been selected for the ODIs.

The Hundred: White playing cards held up by umpires defined