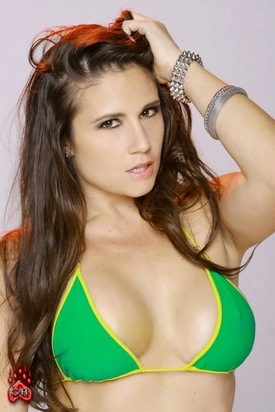 Since this ex Martin County High School English teacher’s international notoriety this past May, fans of her modeling career from all over the globe have been wondering Where is that ‘hot teacher turned model,’ Victoria James? and What is she going to do next? After many offers, some tempting and some humorous, James has joined up with Castro Talent Agency in Denver. Signing a non-exclusive contract, James remarks, “Michael [Castro] is a business man of integrity, but he also has a place in his heart for each of his models. That makes all the difference.” Well, it must have made some real impact on her, because James plans on moving to Denver from South Florida this month. “I love it here- the people, the atmosphere, the geography, and especially the Broncos!”

This whirlwind journey all began in late April when James was forced to resign from her position as a Martin County High School English teacher in Stuart, FL as a result of her swimwear and glamour photos being posted on Facebook. Even though James had coined and used her alias, Victoria James, in these social media venues in order to protect her identity from her students, the Martin County school board still did not approve of her photographs and forced her to resign on April 29, 2013. Ironically, though, her forced resignation launched her international modeling career in a way she could have never anticipated. James tells sources, “It is so bizarre to me that my story was of any interest to anyone. Next thing you know, fans are sending me articles about my story in Greek, French and Russian. American fans from the four corners of the continental U.S. were asking me when I would be visiting their town. It was just nothing I could have foreseen.”

Victoria James, along with the help of Castro Talent Agency, tells sources, “I am going to be the next great, American iconic woman. Right now we have Kate Upton, who I adore. I see myself following in Kate’s footsteps, as well as those footsteps of my other idols Audrey Hepburn, Marilyn Monroe, Grace Kelly, etc…The world needs more intelligent women with curves and personalities, like those of Kate and I, out there. The super-thin high fashion model of the twentieth century runway no longer satisfies the desires of the consumers, and rightly so. We are women with brains, class, a healthy level of spontaneity, and let’s just be honest, feminine figures.”

Two for the top at ACF Car Finance Maidstone

BuzzBGone Zap Reviews – Is Buzz B-Gone Mosquito Zapper Worth It?