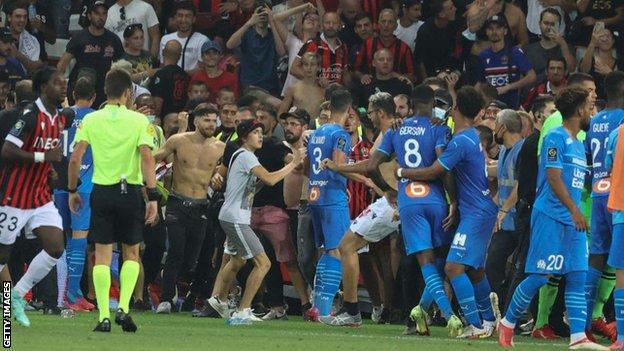 Dimitri Payet was hit by a bottle and threw it back into the crowd before fans stormed the pitch causing Nice v Marseille to be abandoned.

Marseille’s Payet was struck in the back by a bottle thrown from the home supporters as he went to take a corner.

He launched it back, leading to fans pouring on to the pitch as stewards and players struggled to restrain them.

After a long delay, Nice’s players came out to finish the game – but Marseille’s players refused to.

The game was abandoned as a result. Nice were leading 1-0 through Kasper Dolberg’s first-half goal.

Some of the Marseille players were reportedly injured in the trouble.

The chaos continued as the players tried to…

Princess Charlotte: William and Kate launch picture of their daughter for...