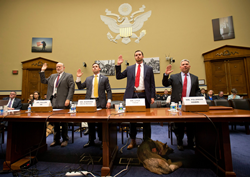 The Human Animal Bond Research Institute (HABRI) lauded the passage of H.R. 1448, the Puppies Assisting Wounded Servicemembers (PAWS) for Veterans Therapy Act, which was signed into law by President Biden yesterday. The PAWS for Veterans Therapy Act directs the Secretary of Veterans Affairs (VA) to implement a five-year pilot program to provide canine training to eligible veterans diagnosed with post-traumatic stress disorder as an element of a complementary and integrative health program and authorizes the VA to provide service dogs to veterans with mental illnesses.

“HABRI is proud to have funded key scientific research demonstrating the efficacy of service dogs as a complementary therapy for veterans with PTSD,” said Steven Feldman, President of HABRI.

The U.S. Department of Veterans Affairs (VA) has documented that PTSD affects more than 15 percent of post 9-11 war veterans. With an alarming 17 suicides per day, addressing the mental health of veterans is an urgent crisis.

With the support of the pet care community, HABRI funded the first pilot study investigating the efficacy of service dogs as a complementary, therapeutic intervention for veterans with PTSD. Results of this study, conducted by Dr. Maggie O’Haire and team at Purdue University, indicate that veterans with a service dog exhibited significantly lower overall PTSD symptom severity, including increased overall psychological well-being; a better ability to cope with flashbacks and anxiety attacks; a lower frequency of nightmares and less overall sleep disturbance; lower overall anxiety, depression, and anger; higher levels of companionship and social reintegration; and lower levels of social isolation. Participants of this first-of-its-kind study were recruited from a database of individuals provided by K9s for Warriors.

“The results of our research consistently showed that on average, veterans with service dogs had lower PTSD symptom severity,” said Maggie O’Haire, PhD, Associate Professor of Human-Animal Interaction, Center for the Human-Animal Bond at Purdue University. “Though still meeting diagnostic criteria, they experienced greater psychological wellbeing overall. We are currently conducting an NIH-funded clinical trial to collect more extensive evidence. In collaboration with K9s For Warriors, we have published research on 327 military veterans with posttraumatic stress disorder, with the goal of continuing to advance rigorous science when it comes to how service dogs are helping veterans.”

“We commend the White House for supporting this bill as a critical step in combatting veteran suicide, and we’re confident in the path ahead for Service Dogs ultimately becoming a covered VA benefit to veterans with PTSD,” said Rory Diamond, CEO of K9s For Warriors. “In communicating with veterans and their healthcare providers, it’s more imperative than ever to embrace the lifesaving impact of a Service Dog and to raise awareness for this treatment option as a proven method for mitigating debilitating symptoms of PTSD and suicidal ideations.”

“We are thankful for the leadership of former Representative Stivers and all 317 cosponsors in the House of Representatives, and Senators Tillis, Sinema, Cramer, and Feinstein, for their work on this important issue, and also to Senator Fischer, a longtime supporter of the Puppies Assisting Wounded Servicemembers Act,” Feldman added. “HABRI is also grateful for supporters in the pet care community who advocated for the PAWS for Veterans Therapy Act and helped fund the human-animal bond research so critical for its passage.”

HABRI is a not-for-profit organization that maintains the world’s largest online library of human-animal bond research and information; funds innovative research projects to scientifically document the health benefits of companion animals; and informs the public about human-animal bond research and the beneficial role of companion animals in society. For more information, please visit https://www.habri.org/.