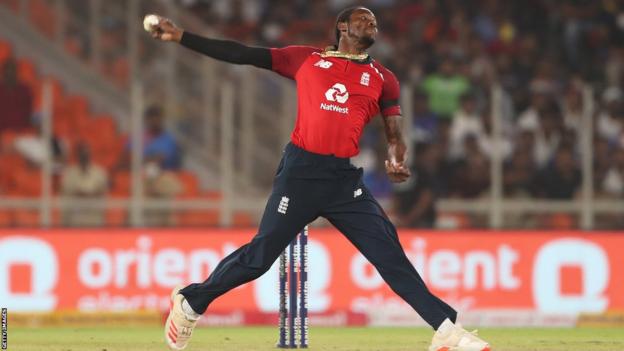 England pace bowler Jofra Archer says he will “do everything in my power” to play a full part in the Twenty20 World Cup and the Ashes later this year.

He returned from an elbow injury to take 3-23 as the tourists beat India by eight wickets in the first T20.

“In the immediate I am going to get through this series. The World Cup and Ashes are a way away,” he said.

“I have to take care of my elbow before I think what will happen.”

Archer, 25, missed two Tests in England’s 3-1 series defeat by India because of the injury.

He has previously said the problem with his right elbow is not the same issue that arose on the tour of South Africa early last year.

England coach Chris Silverwood has said it will need “long-term” management, with Archer likely to be a key figure if England are to win the T20 World Cup in India in October and November and regain the Ashes on the tour of Australia that follows.

The Hundred: Danni Wyatt hits 69 not out as Southern Courageous...