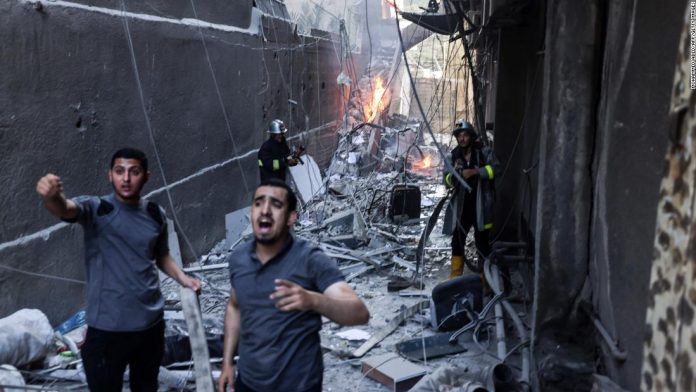 Islamic Jihad said in a statement that one of its senior leaders, Tayseer Al Jabari, had been killed in an Israeli strike. He was a commander in the Quds Brigade, the armed wing of Islamic Jihad, the group said, and a member of its Military Council.

The Palestinian health ministry said at least 10 people were killed, including a 5-year-old girl and a 23-year-old woman. Another 55 were injured, it said. Israel insists most of those killed were militants.

A CNN producer in Gaza saw medics carrying two bodies out of a building called the Palestine Tower that had been hit in one of the strikes.

An Israeli army statement said the military operation — which it called ‘Breaking Dawn’ — was targeting Islamic Jihad, the smaller of the two main militant groups in Gaza.

The Israeli army said the main focus of its military action was a pre-emptive air-strike on Al Jabari, and strikes on two anti-tank squads which were en route to carrying out an attack on Israeli forces.

On a call with…

Local weather change: How wealthy individuals might assist save the planet

Kevin Spacey seems in London courtroom after being charged with sexual...