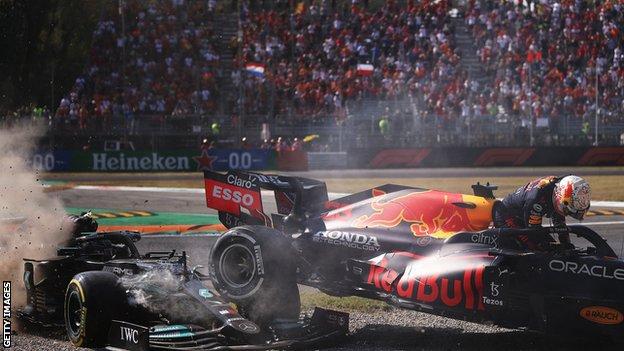 Red Bull’s Verstappen flipped up beside Hamilton as the pair battled for position, the rear of Verstappen’s car landing on Hamilton’s Mercedes, the halo head protection device possibly saving the seven-time champion from injury.

Both retired, beached in the gravel, meaning Verstappen remains five ahead of Hamilton in the title race.

Ricciardo’s British team-mate Lando Norris was second after a brilliant late overtake, handing the team a first one-two since the 2010 Canadian Grand Prix and their first victory in nearly a decade.

Ricciardo screamed over team radio as he crossed the line: “Whaaaaaaaaaaaaaaaaaaa! Yes! For anyone who thought I left, I never left. Thanks guys.”

How did Verstappen end up on top of Hamilton?

Following a rocket start by Ricciardo from second on the grid,…