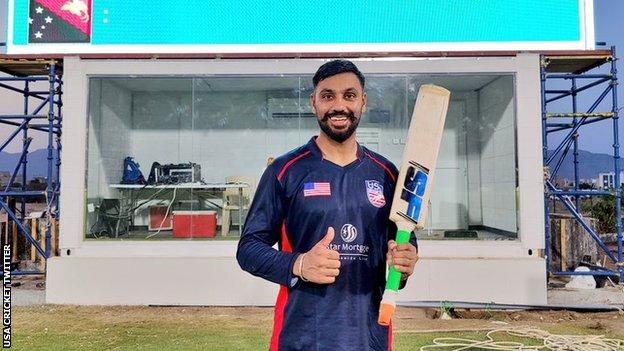 United States batsman Jaskaran Malhotra has become the ninth man to hit six sixes in an over in top-level cricket.

The 31-year-old hit the runs off Papua New Guinea pace bowler Gaudi Toka in a one-day international in Oman.

He is just the second player to achieve the feat in ODI cricket after South Africa’s Herschelle Gibbs in 2007.

It also ensured Malhotra, whose previous highest score was 18, finished unbeaten on 173 – the highest one-day score by a US batsman.

The previous highest was 95 by Aaron Jones against United Arab Emirates in 2019.

Malhotra has also broken the record for the highest score by a number five in ODI cricket, eclipsing the 162 by South Africa’s AB de Villiers against West Indies at the 2015 World Cup.