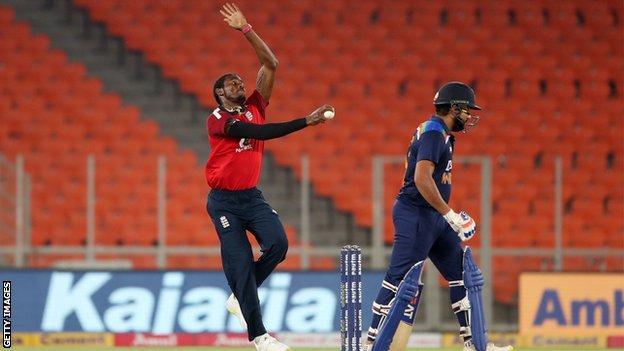 England fast bowler Jofra Archer has had surgery on his right hand after Ashley Giles revealed he suffered the injury cleaning a fish tank at his home in January.

The injury was managed by England during the side’s Test and T20 series in India.

The 25-year-old played in two of the four Tests and all five T20 matches.

Giles, England’s director of cricket, said: “He’s got a fish tank, dropped the fish tank and cut his hand.”

Speaking on Radio 5 Live’s Tuffers and Vaughan show, Giles said: “This is going to sound like an awful conspiracy and I know what’s going to happen on Twitter straight away when I say this.

“But it’s true, it’s not a conspiracy, it was a fish tank. He was cleaning at home [when it happened].

“He’s been in surgery today [Monday] and he’s come out of it well. They’ve operated and actually I think they found a small fragment of glass still in the tendon.

“So it was the right thing to…