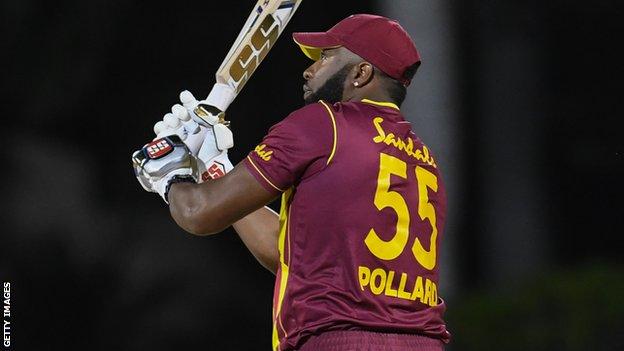 Kieron Pollard struck six sixes in one over off Akila Dananjaya, who had earlier taken a hat-trick, in West Indies’ extraordinary six-wicket Twenty20 defeat of Sri Lanka.

West Indies captain Pollard became only the third man to strike six maximums in an international.

In his previous over, Dananjaya had removed Evin Lewis, Chris Gayle and Nicholas Pooran.

West Indies chased their target of 132 in 13.1 overs in Antigua.

The tourists had been restricted to 131-9 before the drama really began.

In the fourth over, with the Windies already having 52 on the board, off-spinner Dananjaya had Lewis caught at long-off, Gayle – in his first international for two years – lbw and Pooran caught behind.

Cricket and autism: How the game supplies solace for a leisure...