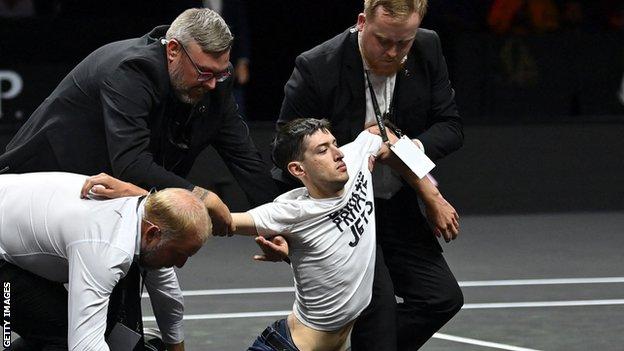 A protester set his arm on fire after running on court and briefly stopping play during the Laver Cup at the O2 Arena in London.

The young man, wearing a T-shirt with the message ‘End UK private jets’, was quickly removed by security and detained in an internal corridor.

Laver Cup organisers said he had been arrested and police were “handling” it.

The incident happened before the second set of the match between Stefanos Tsitsipas and Diego Schwartzman.

“It came out of nowhere,” said Greek world number six Tsitsipas. “I never had an incident like this happen on court. I hope he is all right.”

It is the latest security breach at a tennis tournament following incidents at the Australian Open and French Open earlier this year.

A male protester, carrying a banner which read ‘Abolish refugee detention’, jumped on to the court during the Australian Open men’s singles final between Rafael Nadal and…