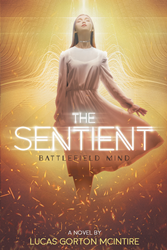 McIntire shares, “It’s been two years since the Great Basin Desert incident. Sorvan is dead, and thirty years of classified underground government research has been made public. After witnessing the amount of power released from the twin’s first physical contact, compelled by fear, nearly every country in the world is racing to develop anti-sentient technology. Yet at the same time, the US has vowed to protect the Sentients so long as they refrain from drawing attention to themselves, and Tabatha makes good on her promise to keep Sarah in line.

“Tabatha, however, has to contend with not only Sarah’s varying personalities but her own fallacies as well; her inability to have children. Her desire for normalcy and a family ends up affecting how she interacts with Sarah, viewing her more as a daughter than a sister. But when Sarah has had enough, her alternate personality, Twenty-Four, is released and, with it, a rage that engulfs the entire city of another country.

“The US is then forced into attempting to take them out. Well aware of the Sentients’ destructive capabilities, the administration then enlists the assistance of an unassuming individual who’s developed the technology to incapacitate them. However, this individual may have more nefarious reasons for helping to bring down the Sentients.”

With dangerous creatures and a mix of natural human desires, this tale is heavily layered in page-turning anticipation.

View a synopsis of “The Sentient: Battlefield Mind” on YouTube.

Consumers can purchase “The Sentient: Battlefield Mind” at traditional brick & mortar bookstores, or online at Amazon.com, Apple iTunes store, or Barnes and Noble.

For additional information or inquiries about “The Sentient: Battlefield Mind,” contact the Christian Faith Publishing media department at 866-554-0919.

Counterfeit Drugs More Prevalent and Dangerous Than You Think!