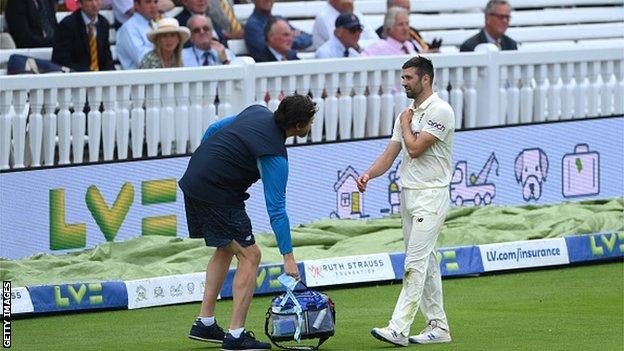 England bowler Mark Wood has been ruled out of the third Test against India because of a shoulder injury.

The 31-year-old jarred his right shoulder while fielding on the fourth day of the second Test at Lord’s.

No replacement has been called up for the Test at Headingley, with Saqib Mahmood and Craig Overton already in the squad as back-up seamers.

“It is frustrating for Mark and for us as a side – he gives us a real point of difference,” captain Joe Root said.

The third Test of the five-match series – which India lead 1-0 – begins on Wednesday in Leeds.

Wood will remain with England to continue his rehab and will be assessed at the end of the Test.

He is the latest player on England’s injury list alongside Stuart Broad, Jofra Archer, Olly Stone and Chris Woakes.

Archer will miss the remainder of the year because of a long-term elbow injury while Stone has been ruled out for the season with a stress fracture.