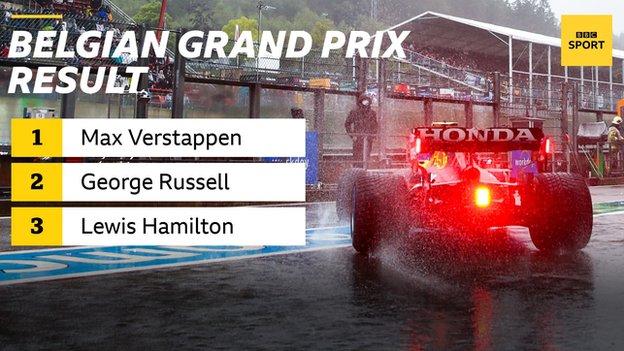 Red Bull’s Max Verstappen was declared the winner of a Belgian Grand Prix that lasted two laps behind the safety car.

Heavy rain prevented any competitive racing at the Spa-Francorchamps track.

The start was delayed by half an hour before two attempts were made to start the race – with a gap of nearly three hours between them.

But conditions were deemed too dangerous and the red flag was flown after two and a half laps behind the safety car.

The result was therefore declared from the grid order, with Verstappen ahead of Williams driver George Russell and Mercedes’ Lewis Hamilton.

Two laps was enough to award half points, according to the regulations, so Verstappen has cut Hamilton’s championship lead to three points.

And Russell has achieved his first podium finish, thanks to a qualifying lap in the wet on Saturday that will go down as one of the greatest in F1 history.

Russell, 23, said: “We don’t often get rewarded for great qualifyings, but we absolutely did today.

Belgium recollects ambassador to South Korea after his spouse is filmed...