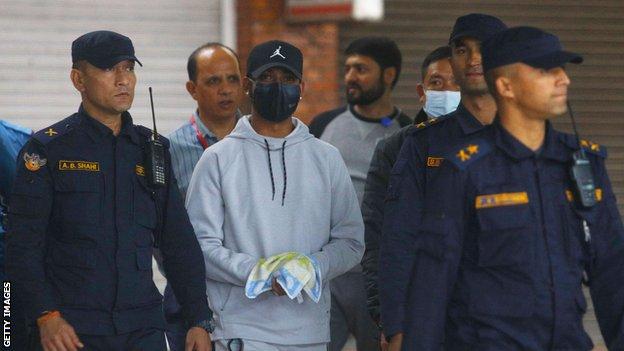 Nepal spinner Sandeep Lamichhane was arrested on Thursday almost a month after a court issued a warrant over the alleged rape of a 17-year-old girl.

Lamichhane, 22, was taken into custody after landing at Kathmandu airport in Nepal, local police told Reuters.

He said on Facebook he was returning to co-operate with the investigation and has denied any wrongdoing.

Lamichhane is Nepal’s most high-profile cricketer, having played in Australia’s Big Bash and the Indian Premier League.

He was suspended as Nepal captain last month following the rape accusations.

The warrant was issued by a Nepalese court on 8 September while Lamichhane was at the Caribbean Premier League (CPL).

A day later he tweeted to say he was leaving the CPL and would return to Nepal.

On 25 September, he issued a further statement having not returned, and after this Nepalese police said they had sought help from Interpol with a “diffusion”…