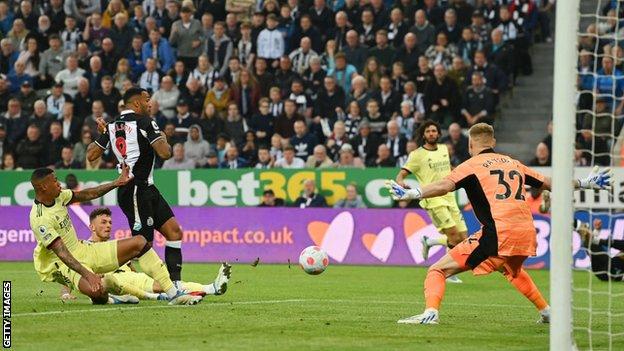 Arsenal’s hopes of finishing in the Premier League top four were dealt a huge blow as they were well beaten by Newcastle at St James’ Park.

Mikel Arteta’s side needed a win to move above Tottenham into fourth and put them in the driving seat to secure a Champions League spot heading into the final weekend of the season.

But they were second best throughout and fell behind early in the second half when Ben White turned the ball into his own net under pressure from Callum Wilson, who was making his first start since 27 December.

Bruno Guimaraes, who has become a cult hero since joining Newcastle at the start of this year, then rounded off the impressive win when he drove into the net as Arsenal struggled to clear.

Arsenal offered next to nothing, with Martin Dubravka only really tested once, with a 25-yard Mohamed Elneny shot in the second half.

Indeed, Newcastle could have won by more with Wilson coming so…