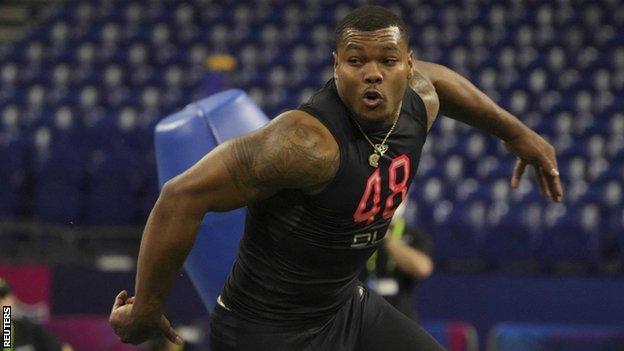 It is two years later than planned but the NFL draft is finally getting the Las Vegas treatment.

Now all the glitz and glamour normally associated with what is a life-changing day for many young players is back.

A red-carpet stage has been constructed in front of the Bellagio fountains, with the main stage built next to the Caesars Forum.

From hundreds of hopefuls, 21 players have been invited to attend the first round of the three-day event, which begins on Thursday (01:00 BST, Friday).

And for the first time in years, there is no standout among them so it is anyone’s guess who will have the honour of being the first name called out by NFL commissioner Roger Goodell.

Why is the draft important?

Making the right selections on draft day can make or break your franchise. Just look at the Cincinnati Bengals.

With the first pick in 2020 they chose quarterback Joe Burrow. Then with…