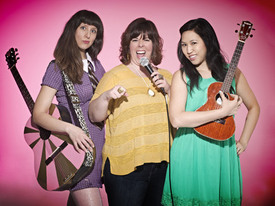 Boasting over 50 comedy musicians featured in 18 shows, panels, and classes, The Second Annual New York Funny Songs Festival will be held in venues throughout the Lower East Side in downtown Manhattan from Thursday May 30 through Sunday June 2, 2013. Some of the highlights scheduled for this year include a CD release party for comedic rapper Rob Cantrell whose notorious single, “Coffee and Weed” landed him regular performances with marijuana legalization organization NORML, New York Funny Songs Festival founder Jessica Delfino’s perennial show, “A Night of Dirty Songs” featuring the raunchiest, funniest songs out there from artists such as Ben Lerman, Howard Stern favorite Red Peters, and celebrated comedic musical duo Stuckey & Murray, and festival hit, “50 Funny Songs”, a fast-­? paced medley of 50 back to back comedic musicians. 2013 will also see an addition of ukulele classes, guitar lessons and comedic songwriting workshops. Sirius XM’s RawDog Comedy channel is on board this year to broadcast many of NYFSF’s shows live to thousands of listeners around the country. A complete schedule of shows, classes, venues and performers will be available on May 3 at nyfunnysongs.com.

This year, NYFSF’s message is playful, yet grounded in reality—they “demand an end to the segregation of stand-­?up comedy and music” and even created a humorous PSA starring some of NYC’s comedy music scene’s biggest names to spread the word, including Rob Cantrell, Stuckey & Murray, Carla Rhodes and Mark Douglas of Key of Awesome. The PSA is available online at http://www.nyfunnysongs.com

The festival has lofty goals. In addition to entertaining audiences and showcasing talent, festival organizer Jessica Delfino hopes to help comedy music cement its own place in the performance world, “so that the talented artists who toil in the field are no longer trapped in a limbo between comedy clubs and music venues.” Praised in The New York Times, Time Out New York, American Songwriter Magazine, Impose Magazine, Playboy Radio, and numerous blogs and websites, the New York Funny Songs Festival is returning from an impressive debut year. They have, apparently, even started a national trend— world famous comedy rock band Tenacious D starring funny man Jack Black is now following suit with their own version of a comedy music festival slated for this fall in Las Vegas, NV.

To help ensure that The New York Funny Songs Festival will have the best headlining acts, production, and promotion possible, a 30-­?day Kickstarter project is being launched through the rest of March until April 19th, with donation prizes such as pre-­?sale tickets to classes and events, festival T-­?shirts, autographed festival performer CD samplers, festival all access passes and more. People can find out more about participating by going to http://www.nyfunnysongs.com.

7 in 10 Pakistanis believe PTI will complete its five-year term...