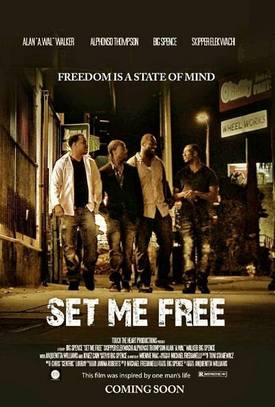 On April 4, 2014 Oakland International Film Festival will be in full swing. Among the chosen films to be featured is Big Spence‘s film “Set Me Free“. Big Spence wrote and directed this film which depicts the life and mind of many urban males. A film that touches upon many topics regarding the struggles, challenges, choices and revelations that take place for urban men growing up in the inner city. Spence who has been in the acting community since 2006 took the reigns on this film making his Directorial debut. Big Spence carefully planned and assembled his cast which included talent from previous films like “Fruitvale Station” (Steven Johnson) and “Licks” (Skipper Elekwachi), Townbiz (Alphonso Thompson), “City At War” (Alan ‘A.Wal’ Walker) “Watch Phoenix Rise”(Jonez Cain) and more. In addition to a well rounded cast, Big Spence hired well known Music Artist Baby Jaymes (Jay Lyrie) as the Music Supervisor and Hip-Hop Artist and producer, Centric (Chris Louray) to do the original film score. Among the many musical talents featured in this film are artists E-40, Erk Tha Jerk, LoveRance, Omarion, Jeanius and Marcus Allen just to name a few.

The Amazing Message of the Bible; as Scientific as Pure Education!