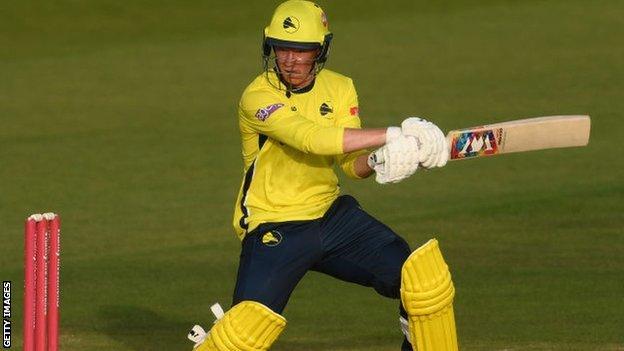 Hampshire teenager Tom Prest had a day to remember at Beckenham as he smashed 181 off 138 balls in a record-breaking One-Day Cup win over Kent.

Lancashire, Yorkshire and Northants also all enjoyed wins in Group One.

In Group Two, Gloucestershire, Middlesex and Sussex were victorious.

But the best finale was at The Oval, where Surrey looked to have lost, thought they had won – and then had Matt Dunn bowled in the final over to tie with Warwickshire.

Star man of the day, however, was 19-year-old Prest, who hit his first century for Hampshire in any form of cricket, just three weeks on from starring in his side’s T20 Blast Finals Day win at Edgbaston.

“It was pretty special,” said Prest. “I can’t really believe it. It was just one of those days when everything went right.

“I felt like I really needed to get a score. They trusted me to open the batting all of last summer and I didn’t get above 40, so I felt like…