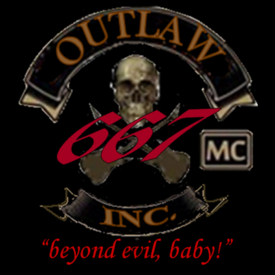 OUTLAW INC. launches Indiegogo.com and Kickstarter.com campaigns to fund their debut album, entitled: “667 beyond evil, baby!” due to be released this coming August, 2014. This is no ordinary recording project undertaking that we’re talking about. This project will include building the studio that the album will be recorded in, as well as fund the live show audio system and lighting and do it for less than the cost would have been to produce the album, alone. You’ll see that there lies a certain method to this madness that some might call genius.

Enter one Derek “D-day” Kendall, owner, founder and sole proprietor of Kendall Entertainment Company and subsidiaries: Goliath Records; BadAxe Music Company; Epic Custom Shop Guitars; DrumWorx Percussion Instruments; Krash Cymbalz; Sound Mind Studio; and acts: Outlaw Inc. and Zeppeland (a Led Zeppelin impersonation), more than two years into the planning and writing of the project that included an eight month demo/research phase, plans for the studio that is to be constructed have been finalized and budgets drawn up. Remarkably enough, building the studio and funding all aspects of the stage and light show will cost less than 50% of what the cost of just recording the album would be in a comparable studio’s “A” room, due to D-day’s (Derek) not needing to “farm out” the tracking to a studio at $100+/hr. Regarding the demo research, D-day states that,” all businesses do market research and I need to see how a couple style variations would fair in a ‘cold call’ setting.”

“We were blown away by the results of the demo/market research project we did,” said Danielle Caparn, Derek’s right hand “man” and Fiancée. “Out of the 5 songs submitted to a reputable music and music licensing online venue, each would make the Top Ten Charts, including two songs on the Top Ten Male Vocal; two on the Top Ten Hard Rock and Heavy Metal and even one song on the Top Ten Arizona along with doing well with the 25-36 and the 37-50 year old listeners and each of the songs would stay on the Top Ten beyond the duration of our 8 month market run.” Danielle added, “Not bad for a one man show. Derek does all of the instruments and vocals as well as producing and engineering, everything.”

In generating interest from would be backers, D-day has put together quite an array of rewards to be had, depending upon the level of sponsorship. Aside from pre-ordering the album that includes special backer packaging and a delivery of 2 weeks before official release, D-day, via his custom guitar company, Epic Custom Shop Guitars, has designed two very special guitars, one for each funding platform (Indiegogo and Kickstarter) that will be only available to backers and will be a limited run, limited edition collector instrument.

You can view the demo research results and the limited edition guitars as well as hear some of the demo at OUTLAW INC.’s”667 beyond evil, baby!” KICKSTARTER.COM and INDIEGOGO.COM crowd funding project sites at:

Danielle states,” It isn’t difficult to motivate day after day when things are going well for you, it’s how you stack up to the challenge in the face of adversity that marks great character.”

If you’d like more information about this topic, or to schedule an interview with Derek Kendall, please call Danielle Caparn at (602)-752-0847 or e-mail Danielle at [email protected]