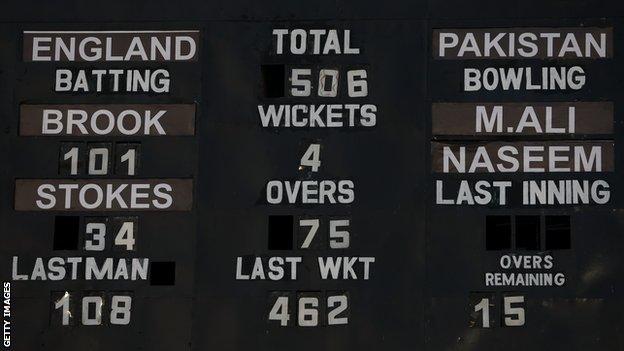 After the build-up to this match, we should have expected plenty of runs.

Everything surrounding England’s first Test in Pakistan for 17 years was extraordinary, so it should have come as no surprise when the cricket itself turned out to be utterly incredible.

The illness that tore through the England camp meant they could only confirm a fit XI two and a half hours before the scheduled start.

Had enough players not emerged from the sick bay, the match would have been postponed for 24 hours. The way it panned out, Pakistan could have done with a day’s delay. Much more of this from England and they might want to send them away for another 17 years.

“We don’t feel like we want to be held back by the narrative of how Test cricket needs to be played,” said captain Ben Stokes before the match.

“We’re in an era now with English cricket, with myself and Brendon McCullum leading the red-ball cricket, trying to let…