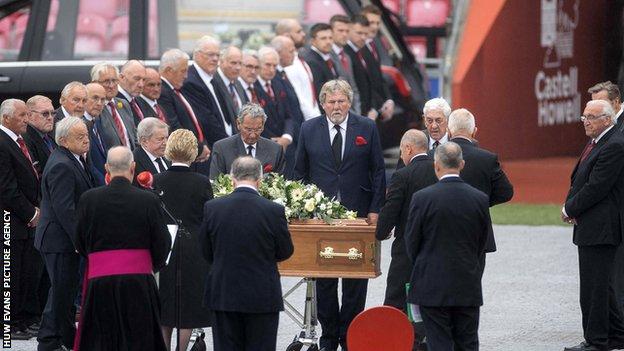 Phil Bennett would not have wanted a fuss. He was an icon of Welsh rugby but one who wore his greatness lightly, modest to the last.

There was a hint of wry amusement, therefore, as his family, friends and former team-mates were joined by thousands of fans at Parc y Scarlets to pay tribute to the legendary Wales and British and Irish Lions captain and fly-half.

While Bennett may have wished to remain low-key, there was no downplaying this moment to honour a man whose life had brought such joy to so many.

As drizzle fell from a slate-grey sky, mourners added colour to the occasion as they were invited to wear the shirts, scarves and ties of Bennett’s beloved teams – Felinfoel, Llanelli, Wales and the Lions.

This was a celebration. Of Bennett the player, one of the game’s all-time greats, and of Bennett the man, a warm and generous soul.

Flowers were arranged on the pitch to…

‘My ancestor was a Jarrow marcher – he’d be livid persons...