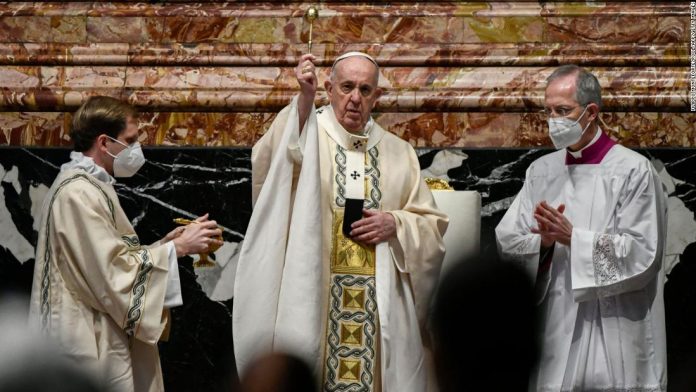 Francis led the service in St. Peter’s Basilica, in a scaled-back event due to Covid-19 precautions.

He also called for vaccines to be shared with the world’s poorest countries.

“The pandemic is still spreading, while the social and economic crisis remains severe, especially for the poor. Nonetheless — and this is scandalous — armed conflicts have not ended and military arsenals are being strengthened,” the Pope said.

“May the efforts to resolve conflicts peacefully continue, in respect for human rights and the sacredness of life, through fraternal and constructive dialogue in a spirit of reconciliation and true solidarity,” he added.

“May the power of the risen Lord sustain the peoples of Africa who see their future compromised by internal violence and international terrorism, especially in the Sahel and Nigeria, as well as in Tigray and the Cabo Delgado region.”
He also addressed younger followers, “especially to the young people of Myanmar committed to supporting democracy and…