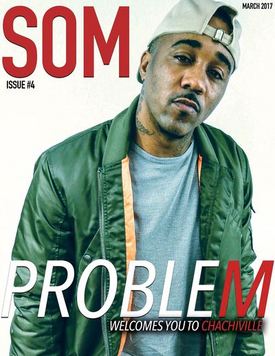 From his independent mainstream success, Problem has become quite the talk lately, as he begins releasing new music along with features surfacing on the new Mike Will album, ‘Ransom 2’. Rueben Wood of SOM Magazine recently caught up with the west coast artist to talk about new music and other projects he has been working on!

Problem details his relationship with TDE and its artist in the new issue of SOM Magazine, speaking on the current scene of Compton music and more. Representing his city in amny ways and creating his own music imprint to open doors for talent hasn’t been easy for the rapper but it has proved to be an outlet well received by the public. Here’s what Problem had to say: I mean them my folks, and when the time is right then it will present itself, but I actually got songs with all of them, their just on a hard drive and hasn’t been released, and because of the way they do their movement it would have to be done a certain way. But as far as future features from them, I don’t know. I’ve been in a bubble, so I’m trying to grow with all the new music i do, and learn to do new things myself. Also trying to get things right for Bad Lucc, Casha, you know. So just like they move, and I respect the F%^& outta TDE, and we got a Diamond Lane album out right now.

Problem goes on to say, “I’m always looking to hear new music and looking for that talent, they just have to know its hard work and lot to do to make it. But I’m always trying to shed light on something new.” In 2017, the MC released the self-produced Chachiville. Problem kicked off 2017 giving his fans a new mixtape (Chachiville) and one-stop online shop for videos, music, lyrics, merchandise and more (www.chachiville.com). The Compton rapper continues to keep all eyes on him as he drops his official video for “My Squad.”

This year Problem’s hit single “My Squad” became the LA Rams team anthem; along with so many other squads across the nation so he called on Todd Gurley and other #Ramly to be part of his official video for the track. His snapchat-story inspired visual takes you through a day in the life as Problem pops up on different squads all over the city. Problem’s new mixtape Chachiville is out now and fans can enjoy videos, lyrics, mixtape music and more on chachiville.com.

Get the new issue here: http://sommagazine.com/cover-story-problem/

SOM Magazine is an Entertainment/Business Magazine with focuses on a variety of topics. SOM Magazine got its first full concept when owner Rueben Wood, began to share the story of his vision. What took over a year to create started in 2012, when the SOM family released it’s first issue. The magazine focuses on entertainment and business at a high grade, and also issues in the community that affect the masses in everyday life. Rueben Wood, was born in the state of Georgia and is an all around entrepreneur and celebrity personality/chef. His inspiration for creating his own company stemmed from his overall aspirations growing up, being interested in business and development of companies.

Announces the opening of Discounttire.cheap online tire store which provides a...